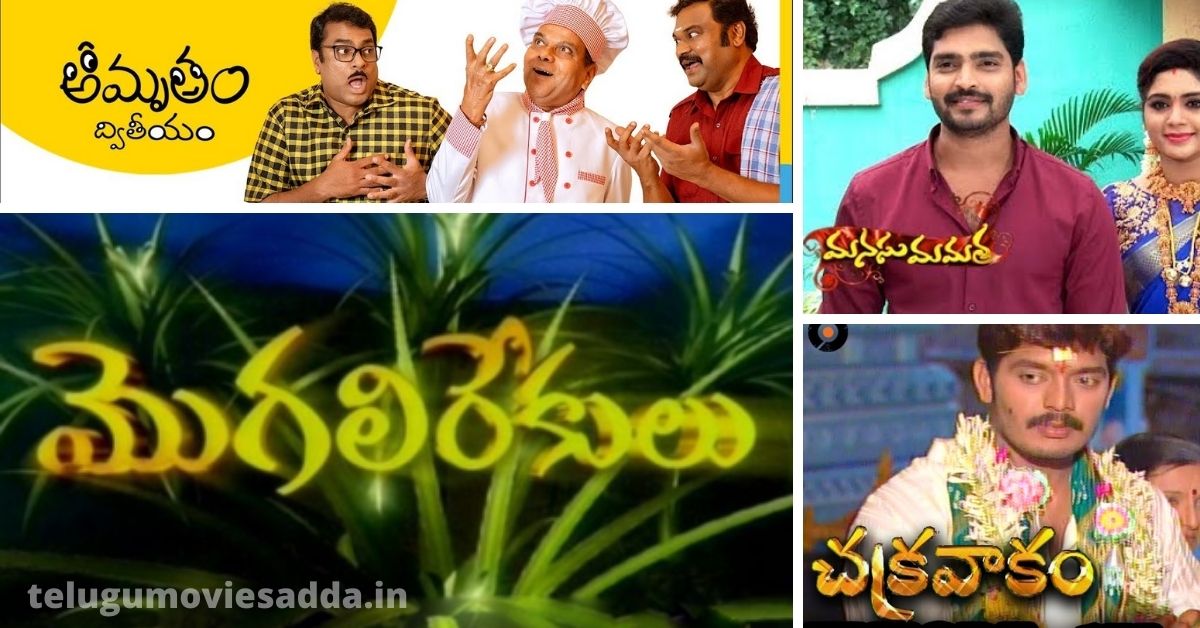 Tv Serials are a part of the home now, Every one sticks around to the TV when their favorite serials starts telecasting. There are many serials have attracted the audience so much that they have started treating them like their own family members. For example, The trending tv serial Karthik Deepam is so intense that people have started calling Nirupam Paritala as doctor baabu outside as well.

So here are the top 10 telugu serials which telugu people loved the most.

Mogali Rekulu is directed by the famous Manjula Naidu. This serial is a mixture of everything i.e; drama, romance, action, suspense everything is there in this serial. This is produced by the studios of Srikanth Entertainment. The first episode was telecasted on 18th February 2008 and the show continue till 24th May 2013. It has become quite a popular serial with 1368 episodes. The main lead of the serial are Karuna, Sagar, Muktar, Ravi varma and shruti. Because of the story strength and the versatile performances of the cast the serial has become a huge hit in the TV industry.

Yet another masterpiece by Manjula Naidu, Chakravakam is a popular serial with 1111 episodes, The last episode was telecasted on 15th February 2008. The same banner Srikanth Entertainment has produced this serial as well. The main cast of this serial are: Selvaraj, Likitha, Ramaprabha, Sagar, Bhel Prasad, Preethy Nigam and Ramakrishna. Chakravakam has won many awards for the best actress and actors as well.

Manasu Mamatha is one of the most popular serials. It is so popular that it has completed 1836 episodes by 2016. It was telecasted on ETV network, from Monday to Saturday. The story is a very typical family story with loads of emotions induced in it. That’s why the people have shown lots of love to this serial.

Yet another serial telecasted on ETV Telugu from Monday to Friday at 8PM. It has successfully aired 839 episodes till 2016. The main lead of this serial are: Neha Gowda, Sithara, Sindhura Dharshanam. This serial is directed by Radha Malieni and the story is written is by Madhav.

One of the most popular comedy serials of all time. This serial is produced by Yellow Media and it is one of the longest serials running in the TV industry. It was only telecasted on Sundays at 8:30PM in Gemini TV. The main lead of this serial are: Jhansi, Sivaji Raja, Naresh, Harsha Vardhan, Late, Gundu Hanumantha Rao, Ragini, Siva Narayana and many more. Because of the comic timings and the versatile performances of the actors, The show has become quite a hit and people loved the serial so much.

Agnipoolu is an another serial directed by Manjula Naidu. This was telecasted on Gemini TV from 8PM onwards. The story is based on the novel written by Yuddanapudi Sulochana Rani and it discusses about the four young girls and their social differences.

Now everywhere Karthika deepam is the only serial that they are talking about. This show has recently completed 900 episodes. The leads of the show are Nirupam paritala now popularly known as Doctor baabu and premi vishwanath popularly known as Deepa akka. This tv serial is the remake of Malayalam serial karuthamuthu.

Lakshmi kalyanam is one of the popular serials of all the time. The serial was aired on MAA TV. The story revolves around two sisters and it has every emotions, sacrifices and family drama is also there. The series is also remade in Tamil by the same name and it aired on Vijay TV.

One of the most popular long running telugu shows in the TV industry. This is telecasted on ETV channel, It is a comedy serial which famous comedians like Raghava, Shankar, Sudheer, Chandra and many others make comedy spoofs to entertain the audience. The first episode was aired on 10th October 2014 and from that day on it is being still telecasted in the TV. In every eposide, The team leaders and group perform a skit and the judges give them points up to 10. Whichever team gets more points will be declared as the winner of the episode and they get some price money as well.

Prema Entha Madhuram is one of the popular shows now. It is telecasted on Zee channel and Zee 5 app as well. It is a typical love story of a boy and a girl. The main leads of the serial are Varsha, and Venkat Sriram. The chemistry between them have been loved the audience that’s why it is getting more TRP Ratings every week.

So these are the top 10 telugu serials, We hope you watch these serials on Television as well.

1 thought on “Top 10 Telugu TV Serials of all Time”